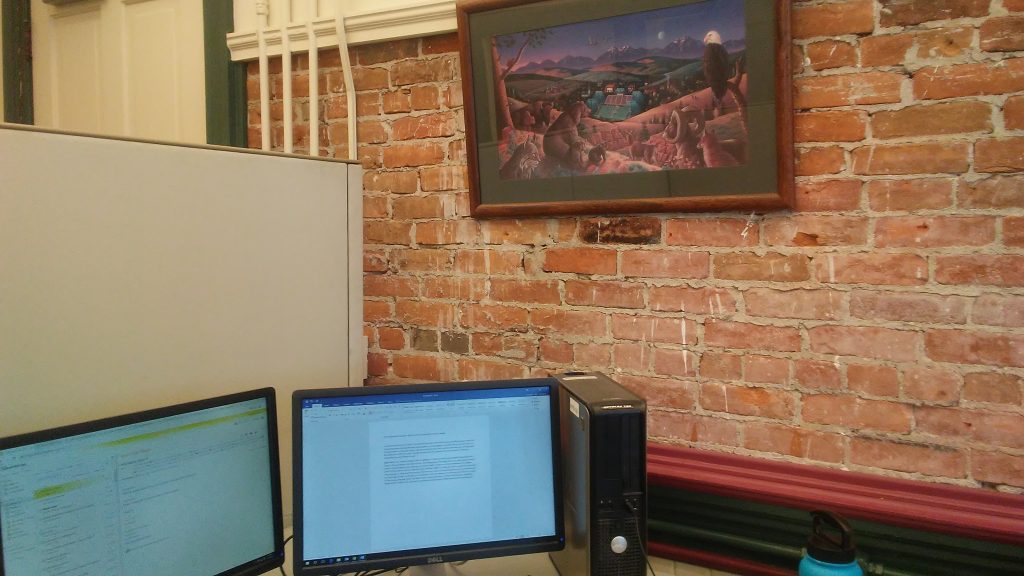 The Disillusioned Learner: Where Society Stands with Climate Change

My desk is in the second-floor Data Office of the University of Montana’s Main Hall – the one with the steeped green roof that appears in every UM recruitment brochure. The Data Office is a pleasant enough space, with one bare brick wall and a window that faces Pattee Canyon. I’m stationed in the common reception area, though the actual Data staff have private offices and mostly keep to themselves.

It’s been a while since I was at this particular desk. Serve MT Symposium was last week in Helena (and an important deadline for St. Patrick Hospital before that). For those who did not attend, it was a large event that gathered AmeriCorps members serving across the state. With speakers, info sessions, and networking, it was somewhere between a training conference and a pep rally. Despite my disdain for the latter, I found the content of speakers and presentations high quality. I could write pages on the speeches given by Governor Bullock, Shane Doyle, and Bill Basl, or on the quiet professor from MSU who talked about community time horizons. However, my current takeaway is from the Energy Corps-focused training with Shannon Stober.

Shannon talked on the “timeline of a service term,” the natural progression from enthusiasm to disillusionment, to eventual contribution and resolve.  When she dropped the line about quitting – “if you haven’t thought about quitting even once, that would be weird,” – the relief in the room was palpable. She articulated the struggle many of us were facing at our host-sites. For me, having those frustrations acknowledged, and validated, was enormously helpful in moving on from the Disillusioned Learner state of mind.

Disillusioned Learner is described by Shannon as someone who has both low competency and low commitment. I love this term. Although not said outright, the implied message is that when you are unhappy and dis-attached, you are fairly useless. Certainly that is true of me; when overwhelmed by the juggling of projects, finances, hours and obligations, my stress reaction is to doubt everything and do nothing. It is self-defeating.

Renewed from the Symposium and back at my host-sites, I want to expand on that Disillusioned Learner idea. As Energy Corps members, we sometimes engage the public on topics of sustainability and climate change impact. In discussions on climate change in particular, society seems to be stuck exactly at “doubt everything and do nothing.” Of course, that is a generalization, as more and more people and companies are adopting green practices. But there’s a clear disconnect in dialogues on the national stage.

Speaking of disconnects, there is a bizarre painting that hangs above my desk in the Data Office. Montana animals look down from high hills to the UM football stadium, where a game is just starting in purple twilight. The players are lined up for kickoff. Books are scattered between the animals (which by the way are not size proportionate; the bald eagle and adult grizzly are roughly the same size). The more you stare at this painting, the more small details pop out and make it even more bizarre. For example, I just now found a red backpack painted into the edge of the canvas, put there either because it is a “student item” or because these animals collectively slaughtered a student.

The author’s intention is clear, but his execution was off. Griz pride and Montana beauty are the implied purpose of the piece. However, proportion, lighting, framing, sense of distance and perspective are askew, so that the entire thing is uncomfortable to the eye.  I have come to love this painting, because it is awful and interesting. On long winter days, embittered and full of doubt, I’ve leaned back in my chair and stared up at these animals. I would think “I’m right there with you guys, all lost on the canvas, disconnected from the scene you’re staring into. The artist wanted to you to be involved, but he just couldn’t paint it right.”

Certainly that was never the intended message of the painting, but for me that is what it has come to represent. There are times, when handling projects, or people, or communities, when all the pieces are there but don’t seem to be fitting together quite right. It is discouraging, especially as an Energy Corps member who may not have the authority, knowledge, or experience to correct a situation.

In regards to climate change, I suspect many members of the public feel that they do not have the authority, knowledge, or experience to properly address the issue. We are collectively stuck in a Disillusioned Learner mindset, saying “Am I making any impact?” “What is the point?” and “I can’t personally solve this,” when faced with the overwhelming threat of rising oceans, erratic weather, global temperature shift, and food and water shortages.

It is important to acknowledge that a large part of what needs to happen to mitigate climate change is out of the public’s hands. Sustainability-focused people, like those that Energy Corps members serve with every day, are out there writing Climate Action Plans and energy policies. But the hope is that those plans come to fruition through communal support from business, political, social, and cultural worlds. In the face of pollution from a corporate power plant, an individual might wonder if the plastic straw they threw away during lunch really was so bad; or that not using a straw really is so good.

Meanwhile that dis-attached person “doesn’t know that they don’t know” about energy-efficient lighting retrofits in old buildings, or the renewable energy profile of their utility company, or an energy bill in legislature that needs public comment. They look on with disillusionment at the green collar work force that has moved on to the Reluctant Contributor and Peak Performer mindsets because they are stuck in self-defeated thinking and have not had their difficulties acknowledged. Broadly speaking, of course.

But the honest truth is that almost all the pieces are there for society to begin addressing climate change on a large scale. The technology is developed, infrastructure is being built, and even money flow is changing as coal becomes a less viable business. Among things left to work on are logistics and public attitude. In other words, the proportion, lighting, framing, sense of distance and perspective in the public’s mindset about climate change. If we are attempting to paint a better picture than the one hanging above my desk, that is.

I don’t mean to oversimplify a complex global crisis with a painting metaphor. I am thinking more about the way we as Energy Corps members have conversations with the public about these issues. When Shannon talked to us about disillusionment, her acknowledgement had the effect of answering those difficult questions. Those “Am I making any impact?” questions. The answer, resoundingly, is “Yes!” Society needs to hear that “Yes” loudly and clearly as well. 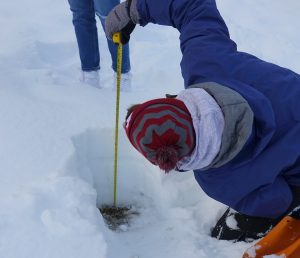 Field Trips in the Snow 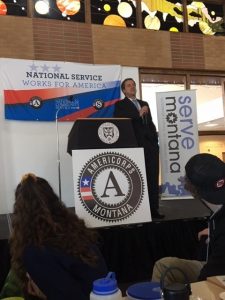 My Commitment to America