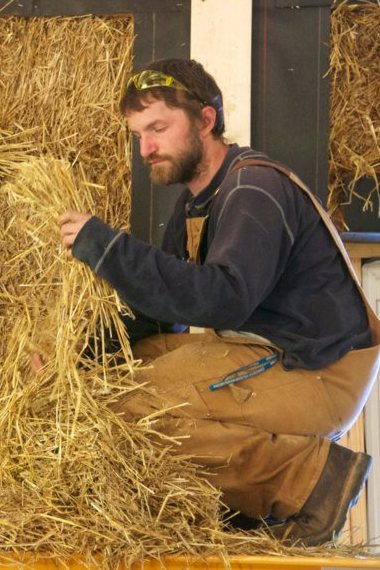 9 years ago
Dan Dean
Energy Corps
Energy Corps member Kenny Lackey reflects on his service term:
My last day in Arkansas serving at Ferncliff Camp and Conference Center in Little Rock, I walked around the Eco Center–the 5300 sq ft strawbale structure I spent the majority of my time working on since December 2012.  There’s not one part of that building I didn’t lay hands on, from plumbing to electrical to the steel and wood framing and straw bale walls and three coats of plaster, interior and exterior.  A swell of memories swirling every I looked:  laughter, sweat, challenges, volunteers come and gone, and the few hands I worked side by side, day after day.

I walked from there to the garden I planned, tilled, prepped, planted, cultivated and harvested.  Again I was struck by the faces that announced themselves in memory.  The camp counselors, an AmeriCorps NCCC team, some friends who came to help, and all the campers who scarfed down cucumber, squash, tomatoes, and anything else, who picked flowers, who challenged me when I explained I had been raised by squash plants in the forest and slept in the goat pen.

The EcoCenter will go on to serve as a resource awareness training facility.  The group Solar Under the Sun, which trains missions oriented teams how to install solar powered water filtration systems in the developing world, will use this building as their new base of operations.  Groups of kids will be staying here for years to come, complaining about how few electrical outlets there are (which is intentional), while their programming will focus them on how dependent they are on HVAC, electrical, running water.  It’s a truly impressive building and I am honored to have been a part.  I still find it hard to believe I won’t be plastering tomorrow.

The garden this year delivered a variety of fresh veggies to Ferncliff Camp and Conference Center’s kitchen, and countless grazing mouths besides, from campers to visitors to squirrels and rabbits, squash bugs and fire ants and brassica beetles.  It was the first garden I planned and implemented independently, and I will always be grateful to both Ferncliff and Energy Corps for that opportunity.  This year’s Garden Corps will be doing their training in that garden today, Sept 13, and I hope that like the EcoCenter it will touch many lives for years.

Energy Corps was difficult, wildly fun and full of laughter.  It felt right, felt productive and rich, every day, and I am left with a remarkable set of memories, friendships, and new skills.  I would — and do — recommend it to anyone, regardless of their current level of interest or experience in sustainability.  I think it grows in you with exposure, and that once there, it will stay with you.  So thank you to my colleagues, to Energy Corps, to Ferncliff, to Arkansas.  I left with a heavy, full heart.

Kenny Lackey was born and raised on the Virginian peninsula, he took an early interest in the environment through the farmland and Chesapeake waterways and frequent trips to the Blue Ridge Mountains. After graduate studies in Boston focusing on Philosophy and Theology, he volunteered on a Pennsylvania farm that altered the course of his life and his relationship to the natural world. Within a year, he transitioned to life as a full-time farmer. After one season apprenticing in New York, Kenny moved to Arkansas to work as a farm education volunteer with Heifer Ranch. Kenny is thrilled to join Energy Corps with a shared vision of sustainable living, environmental awareness, and community engagement. 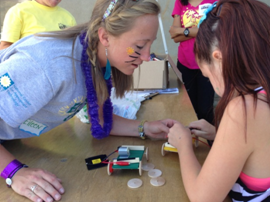 An event filled summer in Butte