A few months ago I realized I was spending too much time thinking about doing things and not enough time actually doing them.  I wanted to organize an event which would bring together AmeriCorps members from across the state and highlight their great work in sustainability, promoting a healthier planet and more durable communities.  I kept hearing how huge the Butte St. Patrick’s Day Parade is (by far the largest in Montana, maybe the entire West) and so I set about planning, organizing and fundraising, keeping in mind the limitations of float to change people’s lives but hoping there was a chance to achieve Program recognition and interest to services which are valuable to so many.

The nuts and bolts

I wanted our float to be as “green” as possible for obvious reasons.  I set out with a vision and sought a partner to assist me realize the better part of my daydream.  This ally came in the form of the *Montana Renewable Energy Association, a non-profit organization committed to ramping up alternative, clean energy in Montana.  They provided the float with the lifeblood of funding and connections which made the whole venture possible. First, the float was pulled by a biodiesel truck driven by Orion Thornton, owner of OnSite Energy, a solar electric company out of Bozeman.  With his veggie power behind us we were able to cleanly utilize LED lighted decorations and tow a trailer with a solar panel and a small wind turbine for display.  We displayed sunflowers made out of painted recycled paper and reclaimed wood.  To emphasize this belief in recycling the float also featured a decorative garland of green plastic bottles collected from the roadsides around Butte and strung together with green and white tissue paper flowers made by a generous employee of NCAT.

The best part of the entire venture was the interest it generated.  10 AmeriCorps members volunteered to participate, representing Energy Corps, Food Corps, Campus Compact and Vista programs dedicated to food security and strengthening the local economy of Montana.  It was amazing to feel the energy surrounding the project as we loaded into the truck and sped off to Uptown Butte where thousands awaited the beginning of the parade.  Although the weather was cold and windy, the crowd was in good spirits or good spirits were in them. In any event, the float’s positive reception was plain as many parade watchers gave us ringing applause as we passed.

It felt great to spread the word that AmeriCorps is “Green” in such an enjoyable and unique atmosphere.  The project enabled me to make professional contacts, friends and provide necessary outreach to our programs which are so vital to the future of Montana.  It also gave me chance to get out from the office chair. 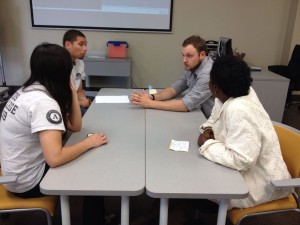 Workshops in the Making, an AmeriCorps Week Opportunity, and Ethanol Fuel 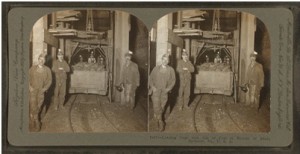