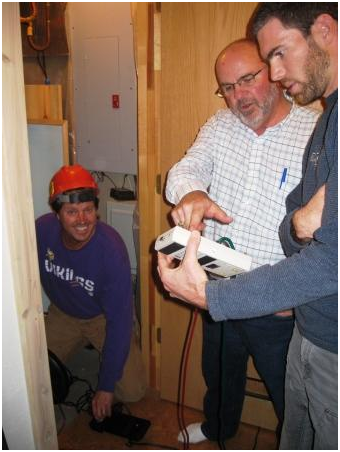 It is not an exaggeration to say that I was met with entirely blank stares when I informed people what I was in town for that week, and I don’t blame them. During the first week of November, a fellow Energy Corps member from Butte and I were fortunate enough to have the opportunity to participate in a Home Energy Rater System (HERS) Rater training in Missoula, MT.  A few inquiring minds made the reasonable speculation that HERS might be related to the more commonly known LEED (Leadership in Energy and Environmental Design) certification program. In reality, HERS and LEED are separate and somewhat competitive programs, LEED specializing more so in commercial spaces and HERS in newly built residential buildings (a.k.a. homes).

LEED is the name of a certification awarded by the U.S. Green Building Council (USGBC), whereas HERS is a program of the Residential Energy Services Network (RESNET). Essentially, HERS takes into account a house’s energy audit and Energy Star appliances to compare its efficiency relative to an established base-level home. My elevator speech for those who asked what I would be doing that week and weren’t familiar with HERS, though, was that I was learning to Energy Star certify homes and to perform blower door tests, which wasn’t precisely accurate. Although citing Energy Star and blower door tests was the easiest answer, we really learned so much more.

We had the pleasure of taking the class with a few professionals from a non-profit similar to a local-level Habitat for Humanity, and that meant I was the only one in the room with no building science background. I had a lot of catching up to do in order to have an eye for all of the components of a house that make up the data that must be collected during a HERS rating assessment. Plenty of people have gone from zero home-building background to attaining HERS Rater certifications, but I hadn’t expected to find the training as applicable to my life as I did. I had never thought about how moisture moves through walls before, or how different building materials and the layout of those conduct heat and let air flow through differently.  I learned the difference between a poorly-built house and one where quality is prioritized. I now feel better able to have a conversation with my landlord about concerns I should have with my house as well as able to help other tenants and homeowners have similar discussions.

To get hands-on experience, we spent the afternoon of the third day actually visiting a home and going through all the measurements we would need to take in a real HERS rating assessment.  HERS assessments require knowing the dimensions and volume of a house, as well as the makeup of the environment on the outside of the walls (which can be tricky when it comes to basements in particular) and many minute details of the building’s water, heating, cooling and light systems.

On the site is where we got first-hand experience setting up a blower door test, which depressurizes the house in relation to the outside and measures the air leakage of a home using a bulky, calculator-looking device called a manometer that is hooked up to a fan in the door that is otherwise sealed-off. Hard to imagine if you’ve never seen an energy audit done before, I know. You’d be amazed, though, at how easy it was to pick up. I certainly was!

The day concluded with the duct leakage test, which even the professionals in our class seemed to dread because ducts are notoriously leaky and hard to get a reading on from the manometer. Working through it together made for a great learning experience though. We did find that the ducts were, in fact, fairly leaky. We concluded, however, that because the ducts were all within the building envelope (insulated barriers to the outside, walls, ceilings, etc.), their leakiness was not detrimental. That’s because any heat that escapes from them will just go toward heating the rooms in the house anyway, nothing is lost to the outside.

Although I know it probably should have been getting to run around (more like carefully walk through, observe and take notes on) a house, my favorite part of the training was plugging all the data into the computer software back in the classroom. It was fun to see the software run the calculations after all the data was plugged in and produce a HERS score. Although that sounds mundane, there are plenty of grey areas in many of the data pieces from a home, and thus to use the software actually requires a lot of judgment calls and logic. Each rater generally comes up with slightly different HERS scores, which was fascinating to compare. There can only be a three-point margin of error on a scale of 100 points too, and that’s a pretty small window.

The week culminated with a series of three tests, which served as excellent practice. To actually become a certified HERS Rater, a person must pass the HERS certification test and then conduct two solo HERS ratings. Although those requirements were outside of what we were able to achieve that week, I am extremely thankful to have an entirely new set of skills and mechanical knowledge as a result of being a participant in the training.

Emily Caponi earned her bachelor’s degree in environmental studies in 2013 after just three years at the University of Montana. During that time she completed an internship at the Department of the Interior in Washington, DC as well as lived and worked at the University of Montana Forum for Living with Appropriate Technology during her final year. During her term of service, Emily will be providing hands-on energy efficiency and alternative energy assistance, education and outreach to underserved Montana communities. She will also form energy action networks to develop sustainable strategic energy plans. 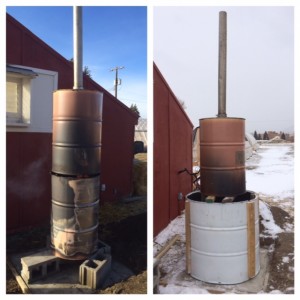 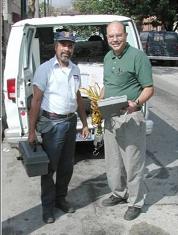