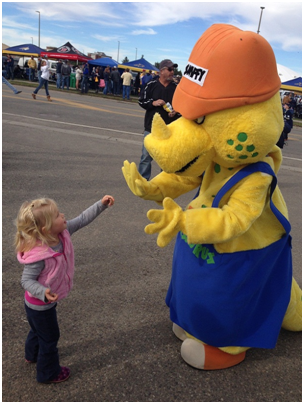 It was a crisp, clear fall day in Bozeman, Montana. The smell of grills lingered in air and the sound of music echoed through the parking lot. Bobcat fans all around were getting pumped up for their homecoming. With solar panels set up from the Montana Renewable Energy Association,energy efficiency games from NorthWestern Energy, an insulation display from the Weatherization Center at the Department of Environmental Quality’s tailgate spot, I was excited and anxious to be a part of this day. With one big foot out the trailer door, then the second and followed by a rather long tail, Sniffy the Sniffasaurus made his way toward the tailgate followed by Louie the Lightning Bug.

That’s right you read correctly, I was at the Montana State tailgate to promote energy efficiency and safety as Sniffy the Sniffasaurus and my work partner Eileen as Louie the Lightning Bug. Children from every direction were seen making their way towards our tailgate. Suddenly I felt arms all around me, hugging me and even tugging me. We were surrounded by a mass of children who wanted to hug, high five, take our picture, and occasionally taunt us. After much time spent dancing and attempting the throw a football through the energy hog fridge it was time for Sniffy to take a walk around the tailgate. With one giant shoe in front of the other and an extra pair of eyes to guide me, I was off into the vast sea of tailgating children, adults and college students. It wasn’t long before I realized how challenging wearing a dinosaur costume could be. Nearly being run over by the marching band, the game was about to start and it was time for a break.

I was fortunate enough to be able to watch some of the game before having to return to mascot duty at half time. This time I was a lightning bug, Louie the lightning bug to specific. All was well at the start of half time, but that was just the calm before the storm.   Many fans began to emerge from the stadium and make their way towards Louie and Sniffy. The morning may have been surrounded by excited children but half time consisted of excited college students. We were suddenly taking pictures with bobcats and people with their chests painted. In fact the college students were so excited to see us that when it was time to leave we had to get escorted to our changing area. All and all, it was a fun day promoting energy efficiency and safety. 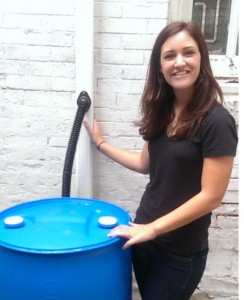