For National Volunteer Week (April 15 – 21), a group of Energy Corps members in Arkansas spent the day out at the Cobblestone Project’s, The Farm. 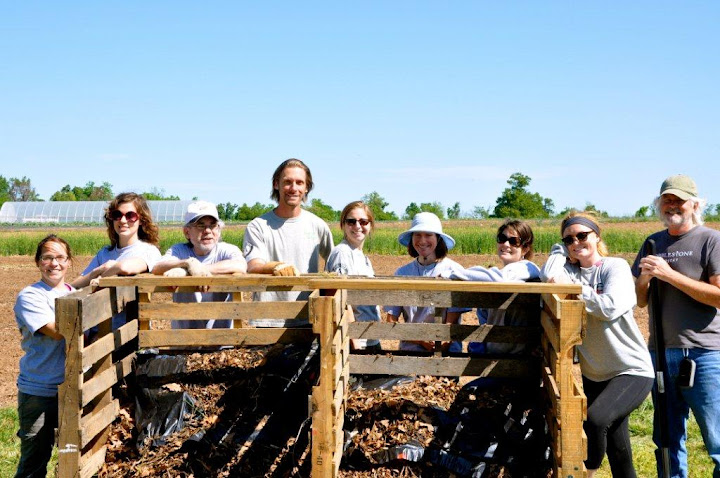 The Cobblestone Project was founded in April 2008 by a small group of NW Arkansas families who were committed to putting their belief’s into action with the hope of making a meaningful difference in their community. The Farm opened in January of 2011 and in that short time span, with the utilization of the Energy Corps AmeriCorps program (hosting members Gary Davis and Hannah Campbell) and generous donations, volunteers, and support from the local community, it has grown by leaps and bounds into a phenomenal operation. Row crops, stretching 300 feet long of a great variety of vegetables, big and beautiful flowering berry bushes, asparagus, garlic plants, and even a birdhouse nested by martins now define the landscape across the rolling hills.

Energy Corps members spent part of the day hauling compost and side-dressing the potato plants.  “Lady Bugs are good, but potato beetles are not,” instructed Hannah Campbell, Energy Corps member serving on the Operations Team at The Farm. She graciously showed everyone how to squish them…but after a everyone had a few encounters the only person up to the task was Leah Saffian, who stepped up and was dedicated to potato beetle eradication for the entire afternoon.  Thanks, Leah!

An electrician was putting in the lines to provide power under the newly roofed Pole Barn to allow for a few refrigeration units and sinks to be installed to transform the area into a minimal (but very convenient) processing area.  This will allow the staff and volunteers to clean the dirt off of the produce that will be headed to farmers markets, school lunch and snack programs, food pantries, and etc.

The High Tunnel, an unheated greenhouse hoophouse, is located just east of the processing area and is another new structure on The Farm. Gary explained the benefits from the farm’s ability to start their own seedlings and extend their growing season by having crops all year long.  Other findings inside the hoophouse included the usage of a vinegar/water solution for an organic way to control weeds as well as the importance of side by side companion planting, such as basil and tomato plants that has a multitude of benefits to include pest control.  At the very north end of the farm is a new chicken coop and roosting barn that will house 150 chickens. With several varieties of hens, they are expected to lay about an egg a day! This should keep Baldwin, the hen keeper, busy.

What more could a farm possibly need, you ask?  Compost Bins!  Energy Corps members constructed compost bins made from screws and used wooden pallets.  They were erected and filled with compostable material already on the site, and covered to raise the temperature for optimum decomposition. This composting system will serve as a West Fayetteville site for community drop off of organic materials.

Montravie looks out at all of the rows of crops that will need to be harvested, “if you have to feed people, it makes all the difference in the world,” she says.  Indeed, perseverance is the key; and compassion is the driving force at Cobblestone Farm. Thanks for a great day, Baldwin, Elizabeth, Hannah, and Gary!  See you at harvest time!

Building the Home Economy: How to Create a More Sustainable Home and Community