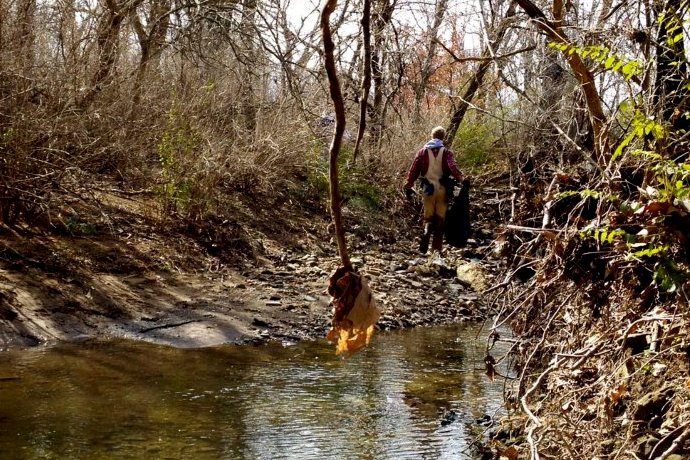 Meditations on Waste at the Scull Creek Clean-Up

Stretching over the water, I just managed to grab the foam cup that was snagged in some roots in the cold Scull Creek.  I clambered up the stream bank and through thick brambles to get a tattered plastic grocery bag caught around a tree where the spring floods had left it stranded.  I spent the whole morning of the Scull Creek Clean-Up this way: scrambling through brush, hopping from rock to rock across the creek, and tempting fate leaning over the water to get at all the litter I could see.  What I found the most of was the detritus that is the remains of take-out food and single-use packaging—straws, ketchup packets, plastic grocery bags, polystyrene cups and clamshells, coffee cups, soda bottles—repeated reminders of how much needless waste is generated daily in our society.

Before becoming an Energy Corps Member with the City of Fayetteville Solid Waste and Recycling Division, the most I thought about trash was that littering was bad and recycling was good—beyond that I didn’t think much about the huge logistical challenges of waste management in towns and cities, and I didn’t think overly much about the excessive amounts of waste created in this country.  Since starting my work here, I have learned a great deal about waste and much of it is shocking and discouraging—but it is a problem that we can have a profound impact on with our everyday choices.

I have learned, for example, that in the United States, every year, we throw away enough paper and plastic cups, forks and spoons to circle the equator 300 times.  In our culture of busy days and little time for mindfulness, let alone a sit-down dinner, we have become accustomed to such waste, and barely even notice it anymore.  But as I was cleaning the banks of Scull Creek with 269 other volunteers on a cold Saturday morning this winter, I noticed, and I started asking questions.  Why are we expending energy manufacturing things we will only use once and then send to the landfill, or worse yet, dump in our creeks?  How did we get to the point where this makes any kind of sense?

I have learned that we as a culture didn’t just wake up one morning and decide to start being wasteful.  After all, for many decades thrift was a virtue in this country—reusing cloth flour sacks, saving buttons, patching clothes, and feeding whatever food scraps there were to pigs.  But under this ethos, people weren’t consuming everything that newly mechanized factories could produce.  To address this “problem,” manufacturers teamed with advertisers and made a concerted effort to create the consumer culture (i.e., the throw-away culture) we live in today.  In 1929, President Herbert Hoover’s Committee on Recent Economic Changes observed that because of advertising campaigns, “economically we have a boundless field before us; that there are new wants which will make way endlessly for newer wants, as fast as they are satisfied.”  Advertisers used their powers of persuasion to make people want more things “endlessly” simply to help companies sell more goods.  The rise of single-use items epitomizes this.  Why just own one reusable coffee mug or water bottle and use it for years when you could buy new ones and throw them away every day of the year?

In 1980, the average person generated 152 lbs of municipal solid waste (MSW) per year.  In 2009, the average person generated 243 lbs of MSW per year.  What has changed in our lives in the last 30 years that has led to this dramatic increase?  It was hardly the Stone Age in 1980—we wouldn’t have to change our lifestyle too drastically to get back to that level of waste generation.  And we have made so many technological advances since then, and have greater awareness of environmental issues now; maybe we could reduce our waste to even lower levels.  Recycling has become an everyday part of most people’s lives, and it is an effective waste diversion practice for those products that we can’t avoid buying.  However, reducing the amount of waste created to begin with will ultimately save the most energy and resources.  Maybe someday soon it will no longer be the social norm to create so much needless waste.

Picking up trash along a muddy creek might not strike most people as an enjoyable activity, but I found the Scull Creek Clean-Up to be extremely satisfying.  It was a hands-on way to make things perceptibly better.  That morning as I was collecting litter, I got off into the brush by myself for a while, and let my imagination wander.  As I collected plastic bottles and rusting metal cans, I began fantasizing about coming across a stash of gold or something like that—not the most selfless daydream, I admit.  But as I continued to pull plastic out of the creek, I realized that every piece of plastic I get out of the urban ecosystem is gold.  Every piece that might have eventually made its way to the floating plastic gyre in the Pacific Ocean, that we kept out of the belly of a bird or fish was gold.  Every foam cup or chip bag that had marred the landscape but that now was going to where it belonged, the landfill, was gold.  The group of volunteers collected 1.5 tons of gold that morning, made a stretch of Scull Creek cleaner, and hopefully made a few people question the logic of our wasteful ways.

Nina Prater grew up in Vermont, but relocated to balmy Cedarville, Arkansas in 2007.  She lives with her husband and daughter on Cedar Creek Farm, raising animals sustainably and humanely.  In 2012, she received her master’s degree in Soil Science from the University of Arkansas, Fayetteville.  She is currently serving as an Energy Corps member with the City of Fayetteville Solid Waste and Recycling Division, and is excited to help Fayetteville meet its recycling goals! 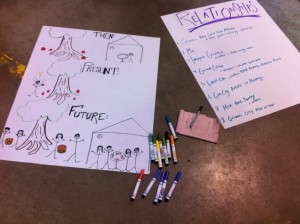 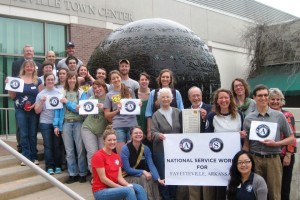