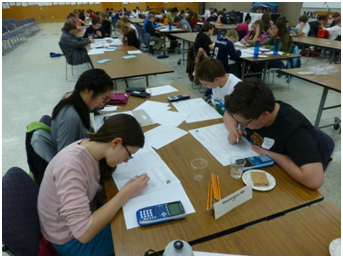 Relating Math and Energy for Montana’s Best and Brightest

Read about Eileen and Rachael’s recap of their presentation that linked renewable energy to math concepts:

Students slowly filed into a large conference room in the student union building of Montana State University. The pencils were sharp, the coffee was hot, and tension was high. Ninety of Montana’s brightest sixth, seventh and eighth grade students convened to test their skills at the Math Counts state competition and battle for a space at nationals. Energy Corps was present to volunteer and as the event’s special presenters. After two grueling hours of tests, Energy Corps was there to link the math concepts they were mastering to renewable energy. Little did we know that during this particular presentation we would have more lessons learned than the students. We thought we would share them with you in case you find yourself in a room with nearly one hundred brainy tweens.

First of all, if you are going to give out candy to the first student to answer a math question correctly, make sure it’s a tough question. Within seconds of reading the question aloud, about twenty five hands shot up. Second of all, ALWAYS have more materials than you need- whether it’s candy or turning point clickers. If you don’t follow number one AND number two, you’re going to be in big trouble. Luckily, we brought a few extra candy bars and had the students battle it out with a few games of ‘rock-paper-scissors’. Third of all, with a group that large, make sure you have extra hands. Our supervisor from NorthWestern Energy and I quite literally ran around the room collecting correct answers, distributing prizes, and later distributing and collecting turning point clickers while Rachael presented the information. After hours of proctoring, the frenzy of presenting to a group that large was a drastic change and left us a little mentally drained. Of course, it was well worth it to be able to show students that the math they excel in is used later in life and to give them a glimpse into the many different possibilities for energy production.

After we finished our presentation, the top ten students competed in a timed countdown round for the chance to go to the national Math Counts competition in Orlando. Leave it to a middle school math competition to make you realize how much your intelligence has regressed. The difficulty level of the questions and the speed at which they processed the answer was truly amazing. We felt honored and humbled to be educating Montana’s wiz-kids and our country’s future leaders.

Rachael Bramblett and Eileen Munsch have focused on providing renewable energy and energy efficiency education through public outreach in the latter half of their service terms.  The Math Counts event is one example of several different settings in which Rachael and Eileen have engaged communities in Southwest Montana about energy. 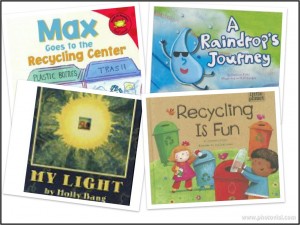 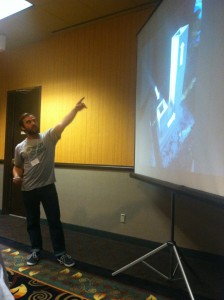 20 years of service and the power of human action