Change and Compost Happen in the Summer South

I found it funny that, when I first moved to Arkansas in November, people warned me about the misery of southern summers. It seemed as though the locals were trying to frighten me out of staying south of the Mason-Dixon line for too long by describing to me in detail the various horrors of the summer months in Arkansas, from the swath of ticks that infest innocent hikers to the sensation of being baked alive in an oven upon leaving the comfort of air-conditioning. In my attempt to assure my fellow Arkansans that I would be fine because I had experienced twenty-one humid Minnesota summers, they nearly buckled over with laughter, proclaiming knowingly that I was “in for a treat.” Though I did not doubt their sense of place consciousness, I still found it difficult to associate thoughts of summertime with unpleasant feelings. Now, as I find myself in the beginning phase of my first Arkansas summer, I’m starting to pay heed to such warnings. Ticks are real, omnipresent companions on all of my outdoor excursions. The incredible humidity inspired me to cut eight inches off of my hair so I wouldn’t overheat. And, according to many Arkansas natives, this summer isn’t even that bad!

To some extent, I have to agree. Certainly ticks and humid, heat-stroke inducing weather are a bit of a nuisance, but summer has some wonderful characteristics. For example, school is out. As an Environmental Educator for the county, I was a bit apprehensive about what my duties would be when school is out of session. I spend the majority of my time during the school year leading educational programs in the classroom. One of my favorite aspects of this particular position is the fact that I do get to leave my desk and my computer quite often to lead programs and interact directly with my students. I have the opportunity to work directly with people, watching them learn from me, and, at once, I get to learn from them. So, needless to say, the prospect of a summer with no school, and therefore less opportunity to lead programs, worried me a bit. And, since I’m in an honest mood, I will admit that the end of school and the transition to summer time has been challenging for me. There has been a lot more “down time” than I am accustomed to with this position, and I have not always had a sense of which direction I should go with it, nor how to put this time to the best use possible. My director called for an education meeting amongst the three educators several weeks ago to discuss this apprehension of how to fill summer down time. She recommended using this time to run some pilot programs, to experiment, to try new things. I greatly appreciated her confidence in me to work on some new projects, so I took her advice and decided to run with an idea that I’ve been dreaming about for a while- food waste reduction in school lunchrooms.

By virtue of having some more free time to make phone calls and connections, I found out about a great program that is put on by Fayetteville food services which provides lunches to students age 18 and under at Owl Creek School. It is open to the public and the lunches are free. Once I got permission from the director of food services, I decided to collect the lunch waste generated from the students each day for one week. Then I had to figure out where that waste would go. Fortunately, this seemingly overwhelming task turned out to be quite simple: about a mile away from Owl Creek is Cobblestone farm, and they just so happen to have a need for lots and lots of food waste for their composting facility. How perfect! With the assistance of two other Energy Corps members in Fayetteville, I was able to collect food waste throughout the course of one week. We put up signage and patrolled the flow of what students were throwing into the bin labeled “Trash” and the bin labeled “Food Waste.” The level of contamination in the food waste bin decreased greatly during the week. It was incredible to me the sheer weight of food waste collected. On our first day, we collected 63.5 pounds. On day number two, we collected 97 pounds! By the end of the week, we had collected some 500 pounds of food waste from Owl Creek’s Summer Lunch program (this included prep food waste from the kitchen). Cobblestone Farm welcomed our uneaten lunch food waste with open arms and smiles. And I was thrilled to give it to them.

Moral of the story? Change happens, and we can either fear it, or we can embrace it as an opportunity for growth. I had become very comfortable with teaching lessons in the classroom and had not really focused on other aspects of my position. When summer came, it brought a change in my responsibilities. Once I began taking advantage of the nature of that change, I was able to take an idea that had been lying dormant for months, develop it, implement it, and see the fruits of my labor (I plan to continue with the food waste collection program once I return from my vacation). As someone once put it so eloquently, “Ch-ch-ch-ch-changes! Turn and face the strange.” 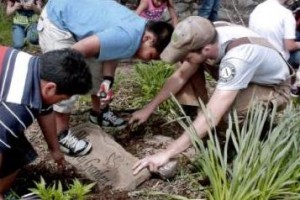 Why Sustainability Education Starts with Butterflies