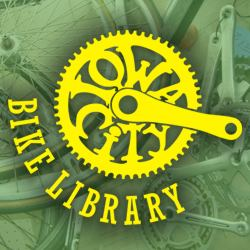 AmeriCorps as a learning opportunity

Read about Samuel Jensen’s parting thoughts as his service term comes to an end:

As my time as an Energy Corps member draws to a close, I’ve been spending a lot of time looking back at this year and what I’ve experienced and accomplished. While my year at the Iowa City Bike Library definitely wasn’t the easiest or most stress free, one thing that I’ve begun to realize is what a great learning opportunity it has been.

My year as an Energy Corps member has given me a great deal of new skills that I think will help me in the future, as well as opened my eyes up to all of the great work people are doing to further bicycling and sustainability in Iowa and around the country.

I’ve had the opportunity to both attend and help hold two great conferences, the Bike!Bike! Conference in New Orleans, and the Iowa Bicycle Summit in Des Moines in January. Both conferences gave me the opportunity to learn what other organizations across the state and North America are doing to further bicycling. I was able to learn new ways of tackling problems and serving patrons that I could take back and implement at the Bike Library, as well as network with amazing people from all over who share the same passions and interests as me. Through the time I spent at the Energy Corps orientation in Fayetteville, AR, I also learned what other AmeriCorps members are doing in Arkansas, Montana and Iowa.

Thanks to the patience and kindness of volunteers at the Bike Library, I’ve also been able to spend this year becoming a pretty good bike mechanic, a skill which I will be able to use in the future, either professionally or on my own personal bikes. Through basically being thrown into it (which is, in my experience, usually the best way to learn something), I’ve also become much better at organizing and holding meetings, managing volunteers, organizing and holding public events, and keeping the shop clean and well supplied. Through my work with Think Bicycles, where I act as a coordinator of the group, I’ve also learned a lot of new things about different types of bike infrastructure and how planning and infrastructure decisions are made in local governments.

Even some of the more negative aspects of my placement have been great learning experiences. I think one great example of this is learning to live off the Energy Corps member stipend. Living on a tiny budget and through cuts in food stamps benefits has taught me to become better at budgeting and given me more empathy for the millions of Americans who live in poverty.

As I finish up at the Iowa City Bike Library and move on to other things, I look forward to using the things I’ve learned this year to continue to make a difference in my community.

Samuel Jensen has a B.S. in Urban Planning from Roskilde University in Copenhagen, Denmark. He also holds the title of co-founder of the Milwaukee Transit Riders Union. Samuel served at the Iowa City Bike Library,  increasing bicycling and environmental awareness through education and outreach. He also assisted in creating and implementing a cycling course that educates the community about the energy merits of alternative transportation.