A Ride on the Wild Side (of a City of Fayetteville Recycling Truck)!

This update comes from Elizabeth Hill, who is serving at the City of Fayetteville Sustainability & Strategic Planning Office 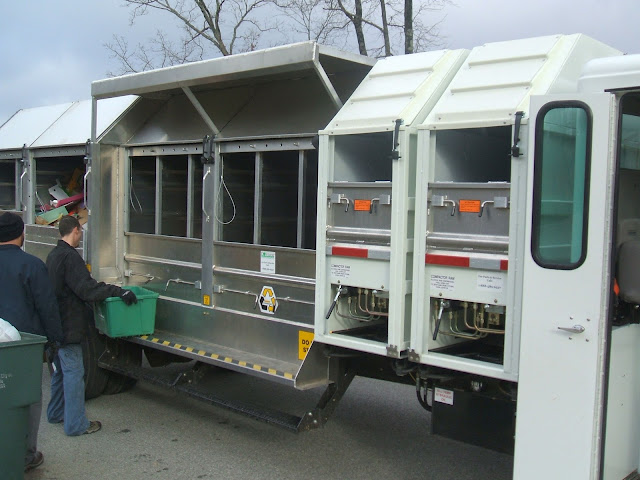 On Tuesday, May 15th, Energy Corps member Liz Hill took a ride on one of the City’s recycling trucks with Jason Davis, who has worked with the Solid Waste and Recycling department for almost 10 years!  By the time she met up with him on the route (39), he’d already been going for 4 hours, and work was far from over.  The day was getting hotter, and the trash and recycling stinkier.  The life of a recycling truck driver (and thus sorter) is fast-paced, and a definite work-out.  For the first few stops, Liz had to stay in the truck on the left seat, what is normally the driver’s seat, because they were at businesses on some very busy roads with cars whizzing around the truck at high speeds.  Once in a neighborhood, though, the real fun began.  That’s when Liz could hop out and help sort (at a seeming snail’s pace, compared to Jason’s quick movements), and then got to hop in on what’s normally the passenger’s side and stand next to Jason while he drove the truck, also standing up!  On some of those curves you really test your balance and arm strength holding on tight to stay in the truck.  Several residences had materials not accepted in the curbside pick-up in their bins, namely 3-7 plastics, and several also left liquids, like milk, in containers, which spoils and makes a mess when tossing them into the truck compartments.  There were definitely residences with no recycling bins and visible recyclable items in their trash cans/bags, as well. 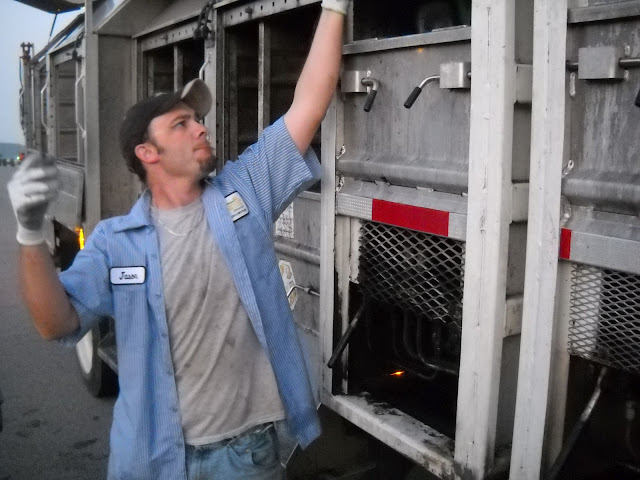 In the moments in the truck between clusters of stops, there was some time for discussing more about the City’s recycling programs.  When asked what he thought should be included in an education campaign about recycling in Fayetteville, Jason emphasized educating people about rinsing containers out, saying: “There is just about nothing worse than having a bottle filled with tobacco spit, or rotten milk leak all over you, and have to smell like that the rest of the day.”  He also thought the City really needs to focus on providing better recycling services to the bars and restaurants in Fayetteville, as there is so much glass (and to a lesser extent cans and plastic bottles) that is currently going to the landfill from these establishments.  He was glad to hear that some recycling is happening at some apartments, and hope that increases.  Jason’s other outreach idea was for the City to have some publicly displayed artwork made from recyclable materials to help raise awareness about recycling. 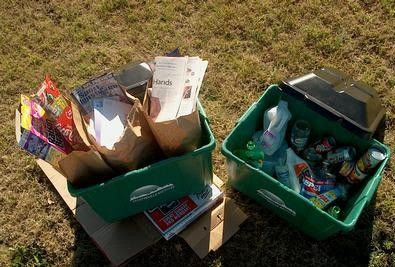 Liz’s final thoughts on the adventure: “I gained a much better appreciation for the hard work that the 10 guys are doing every day Monday through Thursday every week, and can understand why it is hard to keep people in those positions for very long.  I hope that we can help increase good participation, meaning, get more people recycling the right way, keeping it clean and easier on our hard workers.  It’s something so easy to do, if we can just get people in the habit.”